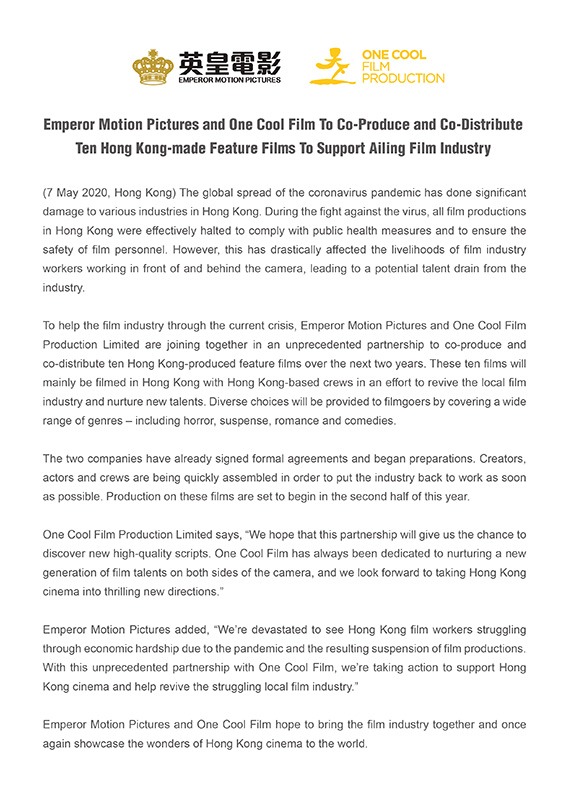 (7 May 2020, Hong Kong) The global spread of the coronavirus pandemic has done significant damage to various industries in Hong Kong. During the fight against the virus, all film productions in Hong Kong were effectively halted to comply with public health measures and to ensure the safety of film personnel. However, this has drastically affected the livelihoods of film industry workers working in front of and behind the camera, leading to a potential talent drain from the industry.

To help the film industry through the current crisis, Emperor Motion Pictures and One Cool Film Production Limited are joining together in an unprecedented partnership to co-produce and co-distribute ten Hong Kong-produced feature films over the next two years. These ten films will mainly be filmed in Hong Kong with Hong Kong-based crews in an effort to revive the local film industry and nurture new talents. Diverse choices will be provided to filmgoers by covering a wide range of genres – including horror, suspense, romance and comedies.

The two companies have already signed formal agreements and began preparations. Creators, actors and crews are being quickly assembled in order to put the industry back to work as soon as possible. Production on these films are set to begin in the second half of this year.

One Cool Film Production Limited says, “We hope that this partnership will give us the chance to discover new high-quality scripts. One Cool Film has always been dedicated to nurturing a new generation of film talents on both sides of the camera, and we look forward to taking Hong Kong cinema into thrilling new directions.”

Emperor Motion Pictures and One Cool Film hope to bring the film industry together and once again showcase the wonders of Hong Kong cinema to the world.